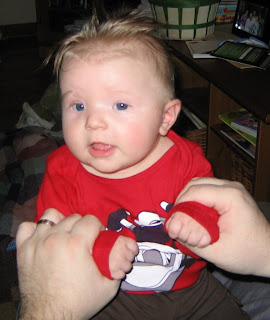 So we've got assloads of baby pics because we're OCD like that but this is my favorite one to date.

The story behind this is that Gus likes to play Punchout with daddy. This basically involves the me swinging his fists at my face and making old kung-fu movie sounds. Occasionally, I'll make him punch my stomach and say "Body Blow!" in that iconic Punch-out voice.

He giggles like a loon. And yes I have video footage ;)
Posted by lusis at 9:31 AM No comments:

Project found among other things

All credit to my wife. I've discovered my next project. Putting that aside, time for some toughts.

Back story:
My son, Gus, loves blue lights. I can't explain it. I realized after watching his fascination exactly how many modern electronics come with blue lights or leds. Our cordless phone, which is where we really noticed it, has blue backlit buttons and a blue backlit lcd screen. The DVD player and amp all use blue lighting. The baby monitor base station and the humidifier both have blue lights on them.

I guess I can't blame him. Still, it's a really neat trick to watch him go from fussy to overjoyed just by pushing a button on a cordless handset. His eyes get wide and he lunges for it.

I'm sure there's a scientific reason for the proliferation of blue lighting on electronics but I don't care. What I do care about is how much Gus likes them.

So I set out to find some toys, any toys, that are safe for his age and have blue lights when you "activate" them. No such luck. Being a geek, I procede to wonder how I might invent such a monster. The best I could come up with was the blue LED binary clock I got a few years ago for xmas. I crafted a mounting position for it so I can put it safely out of reach on his crib when we're in there with him before bath time.

The meat of it:
So in my search for a fantabulous blue backlit toy for Gus, I used thinkgeek.com. While checking out the baby stuff, I noticed this amazing device. We (more directly, Michelle) breast feed. I vaguely remember the first few months of Gus' life but what I do remember was how HARD it was, while being sleep deprived, to keep track of his feeding schedule. When you're waking up every 2 hours the mind does weird things. Your body goes into an "auto-mode" of sorts. Pick up the baby, hand him to mommy, go back to bed, take baby from mommy, burp baby, check diaper, put baby in crib/basinet - rinse and repeat 2 hours later. You won't remember the next time which boob he ate from last and what the status of his diaper was. You weren't even awake for the whole thing. Remember that the two hour intervals work from the start of the feeding and not the end. This means that if the baby eats for an hour, you still feed him AGAIN in another hour from when he stopped eating. Broken system, I tell ya.

We settled for the decidely low tech option (allthough I assured Michelle that in all of my spare time I could craft a Macguyver-esque solution that would eliminate all our tracking problems. It consisted of these two things:

A composition notebook
A minature whiteboard

The notebook was a page per "day" (because day loses all meaning with a baby at that age) that tracked diaper status and time. The dry erase board was for feeding and breast status. In one of my more lucid states, I deigned to be as funny as possible. I drew two "boobs" (circles with dots in the middle) and pointed an arrow at which one was next. That didn't last very long as I had a better method.

Underneath that I wrote "FEEDING SCHEDULE" and plotted out however many hours I could fit on the board with a dash after it. After the dash we would write which boob he was fed from during that feeding. It essentially looked like this:

and so on. You might suggest that I would just plan out the boobs in advance as well but there's a chance that he would, at any given feeding, eat from one or both. That means that we wouldn't really know until feeding time which one was last used.

The whole point of this post was about the thing I found on thinkgeek. As more and more of my geeky brethren and sistren start having children, expect to see the job of the new parent made slightly easier by things like the itzbeen timer. Push a button and it records the feeding time. Push another button and it records which boob was used.

All it needs now is a usb connector so you can import and graph the data. Makes me want to have another right now just so I can try it out.

Almost.
Posted by lusis at 1:10 PM No comments:

Looking for a project

As I sit and watch the AWS emails come in about this new thing and that, I find myself trying to think of a "project" of sorts to really have more fun with the latest AWS offerings. Nothing is really coming to mind.

I'm not trying to create the next Twitter or anything. I just want to keep abreast of the latest technology. One thing I can say about RBX was that we were willing to "try" things if it made sense. I had an immensely fun time working on the Elf Island proposal to use EC2 and S3. Amazon has done a lot in the past year to address my biggest concerns with things. The addition of the management console is just awesome and makes me want to poke at it a bit more.

It's possible that I might move my various family galleries over to S3 backed storage. I'm looking at doing some WoW related stuff as well.

Maybe I'll go ahead and do that hosted Nagios thing I've been wanting to do for so long.
Posted by lusis at 3:57 PM No comments: